MASERU – International Mother Language Day is observed on February 21 every year to promote linguistic and cultural diversity and multilingualism.

This observation recognizes that languages and multilingualism can advance inclusion; remaining true to UN global Sustainable Development Goals focus on leaving no one behind.

Musician, lyricist and a Sesotho heritage activist whose music and sound is embedded in his mother language, Sesotho, is Kommanda Obbs. He has dedicated his life to music at a tender age and is esteemed as the pioneer of the Sesotho rap music sub-genre affectionately known as ‘Tšepe’.

Kommanda Obbs, whose real name is Obatia Chapi, is originally from the small Northern border town of Maputsoe, and speaking to Life&Style he notes that his biggest inspiration is always the richness of Sesotho and global folk cultures that he adds inform his sound, music as well as lyrical narratives.

“I create my content in Sesotho predominantly. My mother tongue is for me the most reliable medium of expression…and it’s my language that puts bread on the table for me. My language, Sesotho, is the most natural and realistic thing ever, in my home language I get to be me,” he adds.

“The richness of our culture and language is what defines my music and artistic expressions.” ‘Tšepe’ is a movement defined by hard-hitting and rhythmic lyricism that emulates the sound of a bell; hard-core, striking and mainly commanding Sesotho vocals.

‘Tšepe’ movement protégé who quit the stable to pursue a solo career, Boshoa Botšoere, says rapping in the vernacular has opened closed doors for him. He says “outsiders like listening to different languages blasting out their versions of music, just like I enjoy fresh hip hop in a different language more than anything.”

“Here at home it doesn’t may not mean much because I am music is listened to by Basotho or other people who understand my language.” 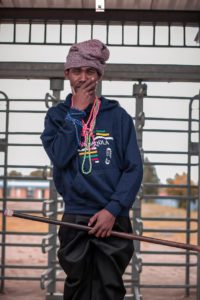 “I would suggest to upcoming artists to opt for Sesotho he youth and the whole generation that uses music as a means of communication, guidance and advice to others to use more of Sesotho in their music because it’s pure and loved mostly by foreign music lovers. This will help them grow quickly as artists,” Boshoa Botšoere continues.

He says language should never be interpreted as a barrier to communication and good music, “it actually is a conduit to international stardom.”

Today there is growing awareness that languages play a vital role in development, in ensuring cultural diversity and intercultural dialogue, but also in strengthening co-operation and attaining quality education for all, as expressed by the two artists.

The idea to celebrate International Mother Language Day was the initiative of Bangladesh. It was approved at the 1999 UNESCO General Conference and has been observed throughout the world since 2000.

On May 16, 2007, the United Nations General Assembly in its resolution A/RES/61/266 called upon member states “to promote the preservation and protection of all languages used by peoples of the world.”