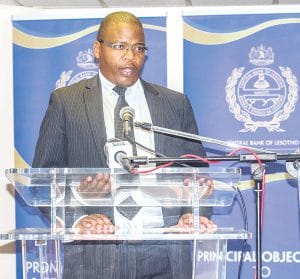 MASERU – The medical cannabis industry in Lesotho has great potential to contribute massively to the country’s economic growth if Lesotho continues to move on the path it took last year.

However, the quality and credibility of regulation is critical, according to the Central Bank of Lesotho (CBL) director research Lehlomela Mohapi, underlining that investors thrive on confidence.

He emphasized that the regulatory oversight of the industry must be seen to be competent to inspire confidence among global market players who operate under stringent rules.

“So the establishment of a competent and credible regulatory oversight of the industry will go a long way,” Mohapi said in an interview with Public Eye on Tuesday this week.

While the country’s economic activity remained subdued for most part of 2018, indicators for 2019 are that economy will see more than two percent growth, courtesy of the phase two of the Lesotho Highlands Water Project.

Mohapi revealed that the promising cannabis industry holds huge potential to grow the economy in many ways in terms of employment creation and bringing more Foreign Direct Investment (FDI) into the country.

An increase in FDI registers direct growth in the country’s economy.

“The industry can also result into an increase in exports and increase in foreign exchange earnings. There will also be positive spillovers into other sectors of the economy such as the services industry.

“In addition, the global demand is very high as reflected by a very high price of cannabidol oil per litre,” Mohapi said adding further that a number of countries in Europe are also legalizing medical cannabis and therefore increasing the market size.

When unpacking the potential in the industry, Mohapi posited for instance that 10 producers assuming an operation in each of the country’s 10 districts can create up to 30,000 jobs from an investment of approximately M12 billion.

With this scenario the director general said the country is looking at the new industry potentially contributing between 8 and 10 percent to GDP in 2020.

“Lesotho has several advantages as a producer destination in the form of climate as well as clean water which provide clear cost advantages to prospective producers,” Mohapi added.

Part of the expected spin-offs are the ready availability of medicines to treat such maladies as cancer for which Lesotho has over the years had to rely on South African medical facilities at enormous cost.

Availability of medical cannabis will save treasury huge sums of money as critical patients will be treated locally on locally procured medication.

Last year, a US-based company, ProVerde set up a state-of-the-art laboratory for mainly the quality control (and therefore beneficiation) of medical cannabis. The lab is headed by local scientist Associate Professor Mosotho George, who was a senior lecturer in the department of Chemistry and Chemical Technology at the National University of Lesotho.