Maseru- Three diplomats were appointed today at the Royal Palace as Ambassadors-Designate to Lesotho Diplomatic Missions in the Kingdom of Belgium, The Federal Republic of Germany and the Swizz Confederation, along with Permanent Representatives to the United Nations Office in Geneva. 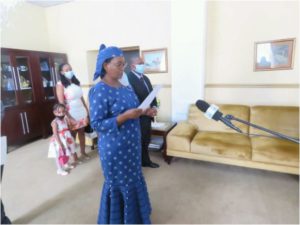 Dr  Ponts’o ’Matumelo Sekatle has been appointed ambassador of the Kingdom of Lesotho to the Kingdom of Belgium and she will also be the Lesotho’s head of missions to the European Union.

The new Ambassador of the Kingdom of Lesotho to the Federal Republic of Germany is Senate David Khabasheane Masupha.

Thabang Matjama is the newly appointed ambassador to the Swiss Federation and Permanent Representative to the United Nations Office in Geneva.