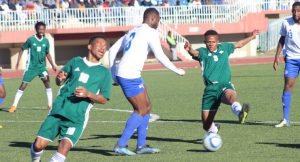 MASERU – In spite of being one of Lesotho’s best attacking midfielders; Phafa Tšosane does, however, not often get the national coach’s nod.

This is despite the fact that the majority of football fans in the country believe the evergreen Matlama player is always on top of his form.

For example, Likuena head coach Moses Maliehe did not bother to call up the player during this year’s Cosafa Cup held in Polokwane, South Africa from May 27-June 9.

Maliehe did also not select Tšosane for the Africa Cup of Nations (Afcon) qualifier against Cape Verde home on September 9.

The coach only last called up Tšosane in 2017 for the Cosafa Cup tournament in South Africa.

It was not the first time that Maliehe selected the Matlama midfield maestro into the national side. He called him up in 2016 to do service in the Cosafa Cup in Namibia where the player scored a placed kick.

The 31-year-old footballer has only six national team caps, two for the Cosafa Cup and four for the Africa Cup of Nations qualifiers under Seephephe ‘Mochini’ Matete in 2014 who was at the time Likuena head coach.

Since then, the player has only always watched from a distance as Maliehe’s charges play.

Maliehe’s decision to not call up Tšosane has in the past weeks been a topical issue on social media, with some local football fans failing to understand the coach’s selection criteria.

Not only do fans see potential in Tšosane but even coaches and former players ask themselves the same question why he hardly ever dons the national colours.

Mohaneng Monyane, the only coach who managed to guide Likuena to their Cosafa Cup final in 2000, says it always makes him uncomfortable how Maliehe turns a blind eye on a player of Tšosane’s calibre.

The veteran former coach and coaches’ instructor even suspects that there might be an axe the coach has to grind with the player.

“Tšosane is a very outstanding player,” Monyane says, adding: “But I suspect he has issues with the coach.”

During his time as Matlama head coach in the 2015/16 season, Maliehe used to regularly field the player and Tšosane played a pivotal role when Matlama became runners up at the end of the same season.

“That boy has a knack for goals and he has the ability to score from anywhere. Now he has matured and he knows exactly what he is doing,” Monyane says.

Tšosane’s other specialty is his ability to kick dead balls, that is free kicks and penalties and is actually one of a few free kick specialists playing in the local top-flight league.

“It is quite rare for our players to score dead balls but Tšosane is quite handy in that department. He is a terrific player and it always makes me sad not to see his name on the list of the players called up for national duty,” Monyane also says.

“He is without doubt a good player whose presence can add value to our national team,” Sepipi says.

He adds: “What impresses me most about him is his incredible intelligence to execute free kicks. We need a player of his calibre in the national side”.

Sepipi, who during his playing days also kept goals for the South African side Jomo Cosmos in the Premier Soccer League (PSL) and Lesotho’s former champions, LDF revealed that at one stage, he actually asked Lioli president, Lebohang Thotanyana, to encourage the player to leave Matlama and sign him up with Tse-Nala.

“It is truly surprising to see the national head coach turning a blind eye to the player, though he knows very well that he can deliver,” he says.

For his part, Matlama’s technical director, Mosito Matela, contends that while he also believes in the player’s aptitude, he however, shows that only the national head coach has the right to select players for national service.

“The person who is responsible for that role is the national team head coach only. It is his decision alone to name the squad and ours is to respect that,” Matela notes.

He adds: “He is our key player and we are fine with his performance. We still believe that one day the national head coach will finally select him because he (Maliehe) used to watch Matlama’s games.”

Matela, a former Matlama player and coach himself also believes that there is a certain weaknesses that forestalls Maliehe from realising that he has a quality player at his finger-tips who he is simply just ignoring for whatever reasons.

“That is why we have to give him a chance because as a coach he selects players who he trusts, no matter what,” Matela says.

Like Tšosane, Maliehe also could not be drawn to comment on the issue except to show that there is a lot of pressure when one plays for the national side contrary to playing for a club.

“At national team level there is a lot of pressure for a coach and players alike from the fans,” Maliehe says.

He adds: “Most people just talk without having an idea of how much it takes for a coach and the players to handle such pressure.”

But former Lioli, Bantu and LCS coach Katiso Mojakhomo, says Maliehe may have a better reason for no longer calling up the player.

“I agree with those saying he is a good player for the national team but we don’t know the reason why the coach is not selecting him,” Mojakhomo says.

“Because when he (Maliehe) was still Matlama’s coach, he used the player as his main man, and he fielded him regularly.”

Majakhomo also says sometimes you would find that terms between the player and coach are not good, while again it could be that the coach has to sacrifice a certain player for others for a good reason.

He says a players’ personality also counts, adding that could just be another reason why the national coach will prefer using certain players instead of others.