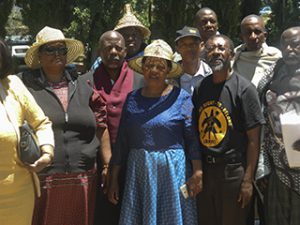 MASERU – Construction of the Kobong Pump Storage Scheme, the hydropower component of the Phase II of the Lesotho Highlands Water Project (LHWP), has been deferred, Public Eye can has learnt.

It was anticipated that the Kobong scheme – a proposed peak power plant that would run only when demand for electricity surges – would generate 1200 Megawatts (MW) for Lesotho’s peak power demands.

This would allow a transfer capacity (export) of 1000 MW of peak power, with a peak capacity of 200 MW available for domestic use.

Lesotho, which produces 72 MW from hydropower at ‘Muela, currently imports power from neighbouring countries to meet its domestic demand of 156 MW.

It supplements the difference by power imports from South Africa’s ESKOM and Electricidade de Mozambique through 132kv and 88kv networks respectively, according to the Lesotho Electricity Company (LEC).

Public Eye can also reveal that government is now conducting feasibility studies on three other sites for an alternative hydropower plant that would make the hydropower component of the Phase II.

“Kobong Pump Storage scheme has been deferred. We are currently looking for other alternatives and three sites have already been identified and ultimately one will be chosen for the generation of hydropower as part of the Phase II,” Lesotho Highlands Development Authority (LHDA)’s Tente Tente told this paper recently.

The LHDA was established by the 1986 order no. 23 as amended under the provisions of the LHWP Treaty.

It is managed by a board of directors appointed by representatives of the governments of Lesotho and South Africa through the Lesotho Highlands Water Commission.

The authority’s core functions are to deliver water to South Africa and utilise the water delivery system to generate hydro power that will ensure a consistent peak power supply to Lesotho.

An official World Bank document Public Eye has obtained shows that the fixed operating costs for the pump storage scheme were estimated to be around US$20 million (about M300 million) per year, with the cost for generating electricity off-peak at around US$130 million annually.