Speaking on behalf of Vodacom, Executive Head Enterprise Business Unit Tšepo Ntaopane explained that Vodacom is aware of the statement issued out by LCA and that they are going to issue a response statement in an hour from now.

Below is a screenshot of LCA’s Statement. 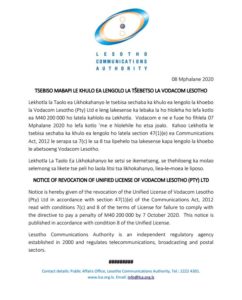