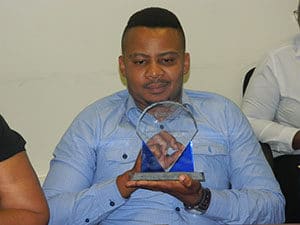 MASERU – Ma-George Lesotho Pure Spring Water, a fully Basotho-owned company, which has made a significant impact in the industry since 2014 is struggling to sell its product in big retail shops in the country.

Ma-George has won an international award from the Global Business Federation for its proven excellence and general workmanship within a short period of time since joining the water bottling industry formally in 2014.

The award, according to the director of the water company Sekhoane Kou, has opened doors across borders, in countries such as Namibia, Botswana and partly in South Africa.

In South Africa the company is yet to fully penetrate the market compared to the other two countries.

“The award means a lot to us, particularly looking at the international market, because we have already made an impact locally despite a few challenges. We are known to be one of the most reputable brands in the country in terms of service delivery and high level of trust and treatment of our clients, so we want to retain the same image on the international scene,” Kou said in an interview with Public Eye on Wednesday this week.

The company, which currently employs 14 people from the plant to its warehouse, exports around 1000 cases or 24,000, 500ml of bottled water to Botswana per month while in neighbouring South Africa Ma-George sends only 500 cases per month.

In Namibia the company has only delivered 500 cases in January this year.

Though the company enjoys some responses from high-end customers abroad, supplying big retail shops in the country mainly Pick’n Pay and Shoprite remains a huge challenge for the company.

Kou says two major retailers in the country do not want their product in their shops and instead refes them to their parent companies in South Africa, a procedure which Kou fails to comprehend.

“We have been struggling to sell our product at these shops until today. Every time we want to do business they refer us to Gauteng and I do not understand why because these companies are operating in Lesotho.

“Most of the water that you see in these shops has been imported from South Africa and to us that is not a fair competition because our product has proven to be one of the best on the land, we deserve equal chances of doing business just like our foreign counterparts.” Kou lament.

In response, Pick’n Pay Lesotho manager Samuel Mphana explained that local water bottling companies should get their companies listed with Pick’n Pay in order to stand a chance to compete with others in the market.

“They have to go to our head offices in South Africa and get their product listed with Pick n’ Pay, in this way they stand a chance to compete,” Mphana said in an interview with Public Eye yesterday.

Absence of a bureau of standards in the country has been one of the major constraints for many local businesses leading to their failure to secure deals with big retailers in the country.

Minister of Small Business development Chalane Phori has however reiterated on several platforms that Basotho should continue to produce in large quantity while government is dealing with issues of standards.

Meanwhile, the ministry of small business development applauded Ma-George Lesotho Pure Spring water for the award, urging more people to support local products, a song that the ministry have been singing since 2017.

One of the ministry’s mandates is to facilitate establishment, operation and growth of Micro, Small, Medium Enterprises (MSMEs) and co-operatives with a view to contributing towards employment creation, economic growth and poverty reduction.