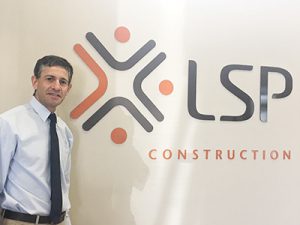 Mokhotlong – The construction industry environment has over the years proven to be prone to severe hazards and accidents which has shaken companies to pay more attention to structures that protect their most valued assets, the workforce.

LSP Construction, one of Lesotho’s most prominent construction companies, has over the years adopted an aggressive Safety, Health, Environment Quality (SHEQ) policy; a forward-thinking management approach designed to reduce risk.

On Tuesday this week the construction company held an awards ceremony for all the work force at its project at Let’seng Diamonds to mark an important milestone – having achieved one million hours of a drastic decrease in lost time injuries (LTIs).

This was the second celebration, following the initial of 500 hours of safety which was held in October 2016.

“LSP Construction is committed to becoming Safety, Health and Environment policies compliant. We devote a lot of time and effort to ensuring protection and promotion of the safety and health of our employees, contractors, visitors, and environment in which we conduct our operations.

At its roots, the SHE policy ensures that processes are in place to prevent or minimise work-related injuries and health impairment of all employees and sub-contractors. The policy extends to meaningful consideration, protection and enhancement of the well-being of the community at large and the environment,” said LSP’s Managing Director, Louis Fourie, in his opening remarks.

It is against this background that the company decided to encourage more compliance to policies and reduction of Lost Time Injuries (LTIs).

“In 2015 we had a total of 24 LTIs per year, but were over the years were able to reduce them to the five that we experienced this year”, said Ranooana, LSP’s Health and Safety Manager, who added that this was a huge achievement of the extra measures that the company had embarked on in order to reduce serious injuries in the workplace.

“Through proper workplace safety analysis and planning, we pinpointed areas that needed special attention in regard to our employees’ safety and wellness. It is against this background that we decided to change approaches and introduced targeted milestones to our employees,” said Ranooana.

He also explained that the achievement had been reached after the company took proactive measures to prevent accidents through effective, ongoing training programmes.

“Health and Safety culture within the company has been continually improving throughout our engagement with different clients such as the Letseng Mine. The conformance requirements from the clients caused the company to review conformance of its internal production processes. For the past four years LSP LTI’s were 24 reported in 2015, and 5 reported in 2018.

“Looking at the hours worked for the past three years, it depicts the compliance rate to Health and Safety Management system, so from 2015 to 2018 the LTIs decreased drastically,” he told Public Eye in an interview this week.

Ranooana congratulated the workers, encouraging them to keep up the good team spirit which would see the company being trusted even for bigger jobs.

On behalf of the workers, Tebello Felete, the company’s General Foreman thanked his colleagues for their dedication, improved communication and team spirit against all odds. He also thanked the company’s management for embarking on extra measures to ensure their safety.

“Investing in safety improvements and care for the overall safety and well-being of employees provides benefits not only to LSP as a company, but even to us the employees,” he said, also committing the staff to becoming more compliant with policies and regulations.

“In fulfilment of this commitment, we shall endeavour to comply with relevant safety, health and environmental laws, regulations, standards and codes,” he said.

LSP Construction is one of the leading commercial, electrical, mining and civil contractors in Lesotho.