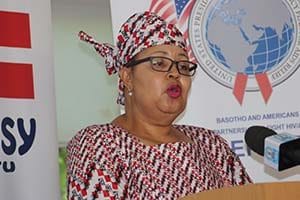 MASERU – Ministry of finance officials had proposed an M80 million cutback on the ministry of health’s antiretroviral (ARV) programme budget for the next financial year, a move which would have threatened the lives of thousands living with HIV, health deputy minister ‘Manthabiseng Phohleli told Public Eye on Thursday.

According to Phohleli, finance officers had proposed the cut in projected expenditure on antiretroviral therapy because they said a litany of health ministry’s prevention and treatment campaigns are fully funded by billions in international donor aid.

Phohleli was allaying growing fears nevirapine stocks in the country were depleted, adding the ARV rollout was central to helping prevent and treat HIV/AIDS and thus should not be tampered with.

Earlier this month, the United States government availed over M1 billion to the ministry of health for the financial year 2019-2020 as part of the ongoing support to help the country achieve HIV/AIDS epidemic control by 2020.

The US embassy said the support is earmarked to build on the incredible strides Lesotho has been able to achieve in reversing the burden of the disease.

“We told them (ministry of finance officers) we cannot fully rely on international donors. We need to have our own budget of ARVs that can sustain us throughout the next financial year. The fight against HIV/AIDS cannot be left fully in the hands of partners,” Phohleli said yesterday.

Studies done across the world have clearly demonstrated that antiretroviral treatment is the best remedy for HIV.

According to National Guidelines for HIV & AIDS Care and Treatment (5th Edition) of 2016, ART reduces HIV-related opportunistic infections and cancers, deaths, as well as diseases not traditionally considered to be associated with HIV, such as non-HIV related cancers, cardiovascular disease, kidney failure, and liver failure.

Suppression of HIV replication with ART reduces the risk of HIV transmission by over 90 percent.

The guidelines emphasised the importance of the HIV “care cascade” – identifying people with HIV as early as possible after the infection, promptly linking them to HIV care and starting ART, and retaining them on treatment through robust adherence and monitoring systems.

Phohleli added that: “There was a shortfall of M80 million in the proposed budget for procurement of ARVs but that has been corrected following negotiations.”

But finance minister Dr Moeketsi Majoro denied this and indicated that government will continue providing sufficient resources to maintain its current commitments consistent with the government’s policy on HIV/AIDS.

“It is too soon for us to be talking about these issues because we are still in the process of preparing government’s financial plan. The plan has not even been submitted to the budget’s subcommittee which will in turn table it before cabinet before it is presented to parliament. I have not even seen it yet,” Majoro said.

“Government has made remarkable strides towards control of the HIV epidemic. We cannot afford to take a step backwards,” he added.

With HIV prevalence at around 25 percent, Lesotho is one of the countries hit hardest by the epidemic.

The Lesotho Population-Based HIV Impact Assessment (LePHIA), a household-based national survey results, prevalence of HIV among adults ages 15 to 59 years in Lesotho is 25.6 percent; 30.4 percent among females and 20.8 percent among males.

This corresponds to approximately 306,000 people living with HIV between the ages of 15 to 59 years.

LePHIA survey was conducted between November 2016 and May 2017 in order to measure the status of Lesotho’s national HIV response. LePHIA offered HIV counselling and testing with return of results, and collected information about uptake of HIV care and treatment services.

Its results were published in November.

However, the survey concluded that Lesotho has made substantial progress toward the UNAIDS targets of 90-90-90, at 77-90-88.

Health deputy minister Phohleli told this paper yesterday that government budget plays an important role in laying out the values and issues government of the day cares about.

She said the proposed cut in the HIV budget would have sent a message that probably government does not care about the people living with HIV.

Phohleli was responding to allegations that there is a national shortage of a key preventive medicine, Nevirapine.

Allegations have been doing the rounds that Nevirapine syrup for neonates, which should be administered to babies within 72 hours of birth, has been in short supply countrywide.

“Those are false allegations. I think there was a misunderstanding, the issue actually was that finance had proposed to cut our ARVs budget by M80 million but we have since resolved the issue,” she said.