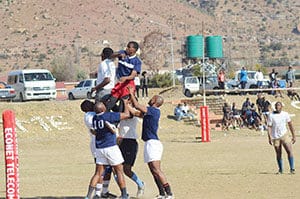 MASERU – The calling off at the 11th hour of the NUL Spears’ match against a Qwa-Qwa club has dealt the university side a low blow to their preparations for the Inter-varsity Games.

That means the National University of Lesotho (NUL) rugby outfit now has to settle for any domestic team playing in the Federation of Lesotho Rugby (FLR) championship.

Playing against a local club was never part of Spears’ plans as they were keen to take on a foreign outfit given they will be up against a number of expatriate clubs when the annual games kick off on March 11.

There is no doubt that Spears, who are hosting this year’s edition of the Inter Varsity Games, will have their hands full during the six-day tournament.

Spears head coach Alex Basitang said the management of the SA team did not explicitly explain why they cancelled the friendly game last Saturday.

“I only received an email from them cancelling the match due to what they called unforeseeable circumstances,” said Basitang in an interview with Public Eye.

“It means we had to change our plans.”

Spears were at the last minute consequently coerced to resort to their FLR opponents Team Liqhomane, who thumped them 31 – 17 at the weekend. Team Liqhomane are the Lesotho Defence Force (LDF) rugby outfit.

Basitang argued that his charges lost to the army side because they were demotivated after their match against the QwaQwa club was abruptly interrupted.

“We had not planned on playing any domestic team as we had communicated with the league director, Ntahleng Mokete that we would postpone our last weekend fixture.

“We were so demoralised that we lost to the soldiers,” Basitang said.

However, for her part, Mokete said the Spears fixture against Liqhomane was never going to be postponed.

“I was aware of that friendly outside the country but Spears’ coach had promised to use their second team to play the army side,” Mokete said in an interview with Public Eye on Monday.

In fact Basitang, who fell out of favour with FLR administrators for pressurising them to account, suspects that someone within the FLR administration influenced the calling-off of their friendly match.

“I have this suspicions because an official of the SA team told me they were actually forced to cancel the game,” said Basitang.

He further showed that certain individuals within the local rugby circles accuse his team of being snobbish and thinking high of themselves.

“But we are only trying to develop the sport and nothing else,” he said.

He added: “They also think we are now challenging their foes after Maseru Select (a picking team for rugby players based in Maseru, which is being administered by FLR) recently beat Qwa-Qwa Rugby Club 26-24.”

Log-leaders, (Team Liqhomane) on the other hand face third-placed Giants who have 12 points, while Mabote Beavers will entertain Cannibals – both matches will be held in Mazenod.

The Mazenod based-side Cannibals are the last team on the log table with four points from six matches, two points behind fifth placed Beavers.

Basitang said his charges were slowly recovering from the disappointment over the Qwa-Qwa match.

He was, however, quick to add that another major challenge was that some of his players who are at school were too busy with their academic commitments to attend training sessions satisfactorily.

“The team is doing very well but we still have a few challenges here and there. For instance, some of the players are busy with school commitments and cannot attend training sessions as well as they are supposed to.

“But we remain in constant communication with them to ensure that while they are away, they are still part of the team,” Basitang also said.