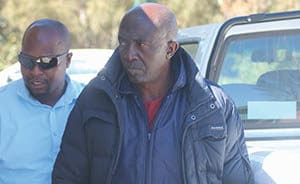 MASERU – Former defence minister Ts`eliso Mokhosi yesterday stunned the Constitutional Court when he alleged foreign judges hired to hear “high profile” cases including his and former army chief Tlali Kamoli were handpicked to ensure they got the death penalty.

In a founding affidavit filed of record, Mokhosi alleged government had scoured the southern African region for judges wont to doing its bidding, adding the executive’s active participation in the scouting of the jurists was tantamount to interference in a judicial function.

Mokhosi along with 15 army and police officers – including former army commander Kamoli – have approached the Constitutional Court to send Zimbabwean judge Justice Charles Hungwe back home.

This, he argued, had added to the body of evidence that should persuade the court that the trialists would not receive a fair trial as government and its chief officers were interested parties in their cases.

“The involvement of the executive in the recruitment of the first respondent and any foreign judge to serve as acting judges of the High Court of Lesotho undermines the independence of the judiciary enshrined under section 118 of the Constitution buttressed by the provisions of the Administration of the Judiciary Act of 2011.

“We reasonably fear that the particular judges have been handpicked so that they could convict us and impose stiff penalties, including death penalty, given that it is still applicable in Lesotho,” Mokhosi said in the affidavit deposed on behalf of all applicants.

All the applicants, except Mokhosi, have been languishing in remand prison for almost two years without trial while government looked for foreign judges to preside over their cases.

The trialists are facing a litany of heinous crimes including murder, attempted murder, conspiracy to murder, theft and damage to property, some of which attract capital punishment.

“We have always been ready to defend our rights and demonstrate that we are innocent but had to wait for the government to appoint foreign judges.

“At the onset it is sufficient to indicate that all our efforts to find out why we would not be tried within a reasonable time were met with a rhetoric that our cases are high profile and will only be tried once the government had appointed judges from other countries to try us because they fear that local judges may not be in position to try such cases for a variety of reasons.

“I wish to indicate that we object to a government made up of politicians like myself initiating the appointment of judges because we suspect that such appointments are done in violation of the Constitution because the government is desirous to have certain outcomes.

“In particular, I am clear in my mind that the government wants us to be convicted at all costs and receive the harshest possible sentences,” read the affidavit.

Their application was postponed to March 14 for hearing after their lawyer, King’s Counsel Karabo Mohau requested more time to file a replying affidavit to government papers filed without notice yesterday.

KC Mohau told the three presiding judges – Justices Lebohang Molete, Moroke Mokhesi and Thamsanqa Nomngcongo – he had been working under misapprehension that government would not file any affidavits after initially agreeing with the lawyers concerned the matter would be argued without the affidavits.

However, Mohau said since government had filled affidavits, it was only fair that he replied in kind.

The court gave him until February 28 to file his replying affidavits, March 7 to file supplementary heads of arguments so that the matter can be heard on March 14.

One of the presiding judges, Justice Nomngcongo advised the parties to attempt to settle the matter out of court and resort to judicial arbitration as a measure of last resort.

He said he had established from their papers that both parties wanted the criminal cases to kick off as soon as possible to serve the interests of justice.

During the hearing which lasted less than 20 minutes, Justice Nomngcongo grilled Mohau on why his clients objected to the appointment of foreign judges.

“Advocate Mohau, why should the nationality of the judges be an issue? To me it sounds Xenophobic.’’

Mohau replied his side had no objection to the foreign judges per se but was skeptical about the manner in which they were selected and appointed.

Attorney Tekane Maqakachane, acting for the government, said there was no evidence of executive involvement in the recruitment and appointment of the foreign judges.

Mokhosi agreed with Justice Nomngcongo the applicants were anxious to have their criminal trials proceed to finality within a reasonable time and with minimal interruptions.

“However, we have been compelled to bring the present application owing to our right to fair trial before an independent and impartial court would have been violated.

“Interestingly, on the evidence of the Prime Minister, the DDP played an active role in the recruitment of such judges. It must be remembered that the DPP is an interested party in our criminal trials and played a key role in opposing our bail application. There is every reason to believe that the fact that the executive and the DDP played a key role in the appointment of judges, the process is tainted.

“It is clear from the various matters involving my co-applicants that the executive would have been conflicted to have appointed foreign judges because some members of the executive such as the Prime Minister Dr Motsoahae Thabane, his wife, now First Lady of the Kingdom of Lesotho, the Principal Secretary of the Ministry of Local Government and in my situation the deputy Prime Minister (as former minister of Police) are directly affected.

“This is because in some criminal cases some of my co-applicants are accused of crimes that are alleged to have been committed against their person or properties.

“In appointing the judges such as the first respondent, I and my co-applicants have gained a reasonable impression that they have been so appointed to ensure that we would be convicted and receive the harshest sentences, including death penalty.”

Mokhosi alleged the Judicial Service Commission – which is constitutionally mandated to recruit judges – had played a peripheral role in Justice Hungwe’s appointment, deferring to the executive.

“The Prime Minister makes it clear (in his affidavit filed of record) that as a result of the Chief Justice’s endorsement that the Executive should recruit foreign judges ‘the minister of Foreign Affairs and the Attorney General stepped in to make politico-legal and diplomatic arrangements to present their request for additional judges to international community’.

“The participation of the attorney general, the legal advisor of the executive and the DDP, the prosecuting authority in our criminal trials, in the recruitment of foreign judges gives me a reasonable impression that certain judges are picked to achieve certain desired criminal outcomes.

“Incidentally, the current Attorney General who played a key role in the recruitment of foreign judges, is a politician and previously held the portfolio of the Minister of Justice from 2012 to 2015. He acted for the DPP in the application in which Lieutenant General Kamoli and his colleagues sought bail.

“He vehemently opposed the bail application and made certain remarks that portrayed the position of the current Executive that we should be punished at all cost. I have no doubt as a political competitor he would want to ensure that I am jailed or I face the death penalty because of our serious political differences.

The applicants questioned the manner in which their cases were set aside for foreign judges, arguing the executive had usurped the functions of the judiciary, in particular those of the Chief Justice.

“The executive had no right to pre-determine that the cases referred to herein, or any other case labelled high profile should be presided over by judges appointed at their instance.

“The recruitment of the first respondent (Justice Hungwe) and any other foreign judge by the executive with a clear mandate to preside over our criminal cases as set out in the notice of motion violates our right to a fair trial in as much as it constitutes the usurpation of the function of allocation of court business by the executive when that function reposes in the Chief Justice.”

Mokhosi argued that local judges should be allowed to hear their criminal cases as they were equally qualified and professional enough not to descend into the arena.

“Significantly I should add that local judges have in the past presided over so-called high-profile cases without any problem whatsoever.”

He named a case which involved soldiers who had brazenly shot and killed former deputy prime minister Baholo in broad daylight.

“Recently as I depose this affidavit an acting judge who has just been appointed from the ranks of magistracy, Justice Mokhesi, presided over a case which is classified in the same way as ours because it involves police officers of senior ranks. This matter is proceeding without any hassles, yet it is classified as a high-profile case.”

The case he referred to involves a former Lesotho Electricity Company (LEC) employee who was killed by police allegedly because he was investigating corruption involving M70 million allegedly missing from the state-owned enterprise.