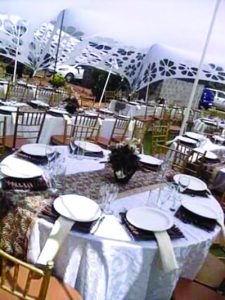 MASERU – Being underestimated is the biggest challenge most women come across on a daily basis in the business sphere and it takes the thick skinned to beat the odds.

Nelly Mokoena of Nellies and Twins Catering business, located in Hatsosane, said being underestimated was an incentive that drove her to succeed in her business.

Mokoena said she had to work twice as hard to prove to the world that she has what it takes to be in business and actually sustain it.

Within just a year of its full operation, the business had hired four permanent staff, a chef, a waiter and a waitress and an office administrator, in addition to other casual employees.

Narrating her experiences, Mokoena said she ventured into the food business back in 2015, but was unable to fully dedicate herself to the business because she was employed elsewhere. Her business only began to show progress last year after she quit employment.

Asked how she ventured into this kind of business, the 41-year-old said she always knew she was inclined towards hospitality business.

“Most people who knew of my hospitality background had been approaching me for my services, and I couldn’t turn them down. Later on I figured I could make it official and that’s how it all started,” she said, explaining that she broadened her studies in hospitality studies at Tswane South College in Pretoria, South Africa.

But as she fully started operating her solo business, Mokoena said she came across lots of challenges that made her the strong and ambitious person she is today.

“Being in business as a woman is very challenging , especially in the culture that we were brought up; sometimes we meet male clients or even employees who would underestimate us and think that just because we are women, we can’t do well in business, she continued.

“To fellow women out there, never mind the negativity around you, get up and follow your passion and with dedication and hard work it will finally pay off,” she advises.

She further revealed that she is not only a businesswoman but also a mother with kids and for her it’s very vital to balance the two.

“Business is about exploring endless opportunities and skillfully managing risks that come along. And being a mother who is also into business, one needs to put even more effort to be not only a mother but a role model to kids,” she said adding with support from her mentor Mamello Phooko from Lijo Catering, she is surviving all her challenges.

Apart from that, she also complained that late payments by clients is usually the biggest challenge in her business.

“Late payments are the most frustrating part of this kind of business because it poses a financial strain and drains funds from other savings, even personal savings,” she said.

However, Mokoena said all these challenges are worth it because in business “one needs to be ready for challenges, trials and errors”.