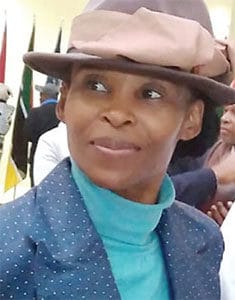 MASERU – Motion Pictures Association of Lesotho, (MPALE) President of the Mpho Letima has promised to push and make local film industry is the next big thing in the next 10 years.

Speaking to Public Eye this week in an interview, Letima said “in the next five to 10 years the industry will be the leading subsector in the culture and creative industry”.

She however noted the industry is yet in its embryonic stage currently.

Below is an interview with her that explores the association in details.

PE: When and why was MPALE established?

M.L: MPALE was established in 2013. That was when we began dealing with consultations to figure out how an organisation of this kind would be run. The reason behind its establishment was because at that time there was no formal unity among film practitioners and producers in the country. This does not mean there were no productions at all. In 2014 we met to discuss how we could develop the organisation’s constitution and that was when we became registered as a legal entity of film practitioners in Lesotho.

PE: Is the organisation serving its intended purpose of developing the film industry?

M.L: Yes it does. The vision and mission of MPALE is to develop the film industry in Lesotho as a production platform as well as a market platform. Are we still doing that? Yes! When we first established the organisation people were ready for something to change so the challenge was that all of us came from an empty space. We had to do more learning than provide things that people had expected to get so they became disappointed therefore we lost a lot of membership and that was the biggest challenge we faced in terms of serving the purpose. I do however understand and appreciate what happened because for every organisation to experience growth, you have to fall before waking up. The first three years of MPALE went down spiral. However, since 2017 I can say we know what we are doing.

PE: Why does MPALE focus only on the film industry and not other entertainment-related crafts?

M.L: Because other sub-sectors have their own representation. If you go to music there is Lesotho Music Rights Association, with fashion there is Lesotho Fashion Designers Association and for culture there is Sesotho Academy. So film is just a sub-sector of the creative industry. Be that as it may, the good thing about film is that it projects everything. For example, when you see a music video you have to see a film guy behind the camera, when you see a fashion show going on there has to be a camera man behind that so there is a relationship of film into these other industries as well.

PE: What roles do you play as MPALE?

M.L: MPALE has a governing structure. The association has four executive positions. We have Mpho Letima as president, Patronella Diedricks as Vice President, Lebohang Motlomelo as the Secretary General and Silas Monyatsi as the Public Relations Officer. The roles we play include 1: to advocate for the film industry to make it a vibrant market. Our advocacy extends to speaking with the policy and the legislative framework regarding laws and regulations that govern this industry. We advise the government to take into consideration the film industry when making laws.

The second role is markets. This is where we say the film industry has to be profitable. We have to note however that the market of Lesotho is very small because we are talking two million people so our market inspiration is more outward looking. Much as we could watch our own films, we are saying for it to be profitable, we have to start thinking internationally and globally to be viable. Our third role is capacity building. As an industry, the best thing we can do is to keep developing ourselves so that our productions could be viable so capacity building is very important.

PE: The film industry in Lesotho grows at a slow pace: why is that?

M.L: That is because it’s a very expensive industry and most of people into it are young and unemployed. For you to get a good cheap camera you ought to have M20 000 and that is the minimum price. How many young people in Lesotho could afford a camera worth that much? The growth of the industry will indeed be slow because you are caught between poverty and doing a good product and you also need to satisfy the value chain. We joke about doing zero budget films but we are killing ourselves by doing that because we do not have the standards. We are just looking to push a movie so it could be out. You would find that those kind of films are of a very poor quality because it is between friends who want to help each other and we would be looking to shoot it in a day since there is no money for locations and actors as well as costumes.

Then there is an issue of taxation because most equipment we use is not available in our country. You can just imagine how much they will be taxed at the border.

PE: What are some of MPALE’S greatest achievements this far?

M.L: MPALE’s establishment is an achievement on its own. Our greatest achievement was to learn that you could always change strategies if things do not go according to plan. The hiccups we encountered were an achievement because we learnt from them which is why in 2017 when we revived the association we literally jumped from 0 membership to 31 members. Our other biggest success was being able to do capacity building with the funds we had raised through some projects. We went out and trained our filmmakers in Leribe and that was the first training where we said film makers are not found in Maseru but in Lesotho so we needed to reach out to film makers in other districts.

With the funds we raised again, we managed to go to the International Film Conference without asking for any sponsorship. We also went to the Lesotho Investment Forum that was held in Gauteng. What the government had basically done was to organise an investment forum so that those abroad could know what is taking place in Lesotho so should they have investment interest they could be able to invest.

We then went to the forum as the only association in the creative industries sponsored by ourselves through and we were able to sit in that meeting.

PE: Tell us about the challenges MPALE faces.

M.L: Our membership is mostly built up of unemployed youth so when it comes to membership fees it becomes a struggle. The highest amount you pay in order to have voting rights is M350. It is a struggle for some to pay the amount due to unemployment and Lesotho having a poor economy so as little as the amount may sound, it is still a huge struggle for others. Another challenge is that the film industry is mostly concentrated at urban areas so there is still a lot of work to be done as far as introducing it to remote areas is concerned.