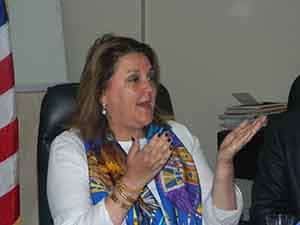 “I am deeply concerned about alarming reports of corruption and police brutality – behaviour that is unacceptable and non-negotiable. The consequences of an interrupted compact development will not be as serious as the negative impact to the people of Lesotho caused by failure to address these critical issues,” Gonzales said.

Lesotho scored 41 points out of 100 on the 2018 corruption perceptions index reported by Transparency International.

According to the findings of the Afrobarometer survey titled: Rights in Lesotho: Citizens views on police abuse, media and personal freedom, gender equality, two-thirds of Basotho said police routinely abuse or torture people in their custody.

The report indicated that these popular perceptions align with a 2017 Auditor General’s report showing that police had paid M7 million in damages to torture victims.

“The chairperson of the Public Accounts Committee of Parliament (PAC), which is currently conducting a public discussion of this Auditor General’s report, was quoted as having told the Commissioner of Police that officers who torture people in their custody will in future have to pay damages from their own pockets,” the Afrobarometer report read.

Unconfirmed reports indicate that over 30 people have been killed by police since 2017.

“It is vital to understand that we still have a lot of hard work to do before we actually sign a compact between Lesotho and the United States. There is still potential for delay or derailment if we do not continue purposefully on the path of reforms and political stability,” the ambassador said.

She added: “But I look at Lesotho’s progress and remain hopeful, as the United States counts on sustained commitment of the government to ensure that the resources we put in place today will develop an MCC compact that will truly reduce poverty and grow the economy for the benefit of all Basotho.”

She was speaking at the signing of the compact development grant agreement worth $5.78 million, approximately M82 million.

The issue of police brutality has in the last two years become topical with polarising views.

It came to the forefront in 2017 when Prime Minister Thomas Thabane ordered police to assault suspected stock thieves and harangued his detractors who said his utterances incited extrajudicial punishment and contradicted the rule of law.

In August 2017, Lesotho Lawyers for Human Rights (LLHR) said the first and most jarring reason that incidences of torture by police were increasing in the country was that it was tacitly encouraged by the Prime Minister.

In a statement last year, a local rights group Transformation Resource Centre (TRC) indicated that human rights violations were rampant in the country and put the blame squarely on the government and security institutions.

“Police brutality and other forms of torture are escalating and are perpetuated by the security institutions,” read the TRC statement.

But Finance Minister Dr Moeketsi Majoro on Wednesday said Thabane and his government were deeply saddened by incidences of police brutality which he said were at variance with what government stands for.

Majoro said when the previous administration that was marred by incidences of both police and army brutality and impunity was ousted, it came as a relief to many Basotho who had hoped with a new government in office, incidences of torture would diminish.

“That was exactly what the incoming government had pledged will happen. Prime Minister has on different occasions spoken harshly against these allegations of torture because they are a direct opposite of what we promised the people,” he said.

Gonzales’s latest remarks are the reiteration of comments she made last year in an op-ed to observe the international day against corruption, an indication that she maintains a hard-line stance on good governance.

Last year she said it was imperative to understand that good governance also means fighting to eliminate corruption – “not just with words, but with actions”.

She said that “these actions should not be finger-pointing”, but rather should focus on equipping the corruption watchdogs like the Directorate on Corruption and Economic Offences (DCEO) with the resources and independence needed to do their jobs.

On Wednesday she said Thabane last December pledged to increase accountability, and indicated that the American people stand ready to join Prime Minister and every Mosotho in the fight for a stronger Lesotho.

“The true prosperity of a country is not determined solely by gross domestic product GDP), she said.

She further explained that true prosperity is also determined by good governance, respect for human rights, rule of law, a security sector including police dedicated to protecting citizens, a vibrant media, constructive political discourse, equal access to opportunity, a military under civilian rule, a healthy environment, a fearless judiciary, a professional civil service.