Maseru – Social media is awash with people advertising that they buy catalytic convertors which are taken especially from imported used cars.

This has raised a lot of concerns by car owners since most of these are stolen from cars without the owners’ consent.

The metals in the catalytic convertor fetch a lot of money from buyers in South Africa. 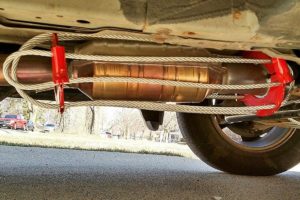 Dealers in catalytic converters break down these cement-like devices and extract these precious metals for resale at a high premium.

The huge demand for these metals has seen an increase in cases of theft of these devices in other southern African countries such as Botswana. Although the theft of catalytic converters does not seem to be widespread in Lesotho, there are people who are already collecting these and piling them up so when they reach a substantial volume they then resell them at a handsome price.

In an interview, Lesibu Thamae who is a mechanic said the theft of the catalytic converters is steadily becoming a trend and unfortunately, a lot of people are still not aware of it.  “It is unfortunate that at times, even some mechanics themselves steal this catalytic converter from clients’ cars and sell it,” he said.

Although Thamae said absence of the catalytic convertor may not always compromise the car’s performance, it actually leads to unacceptable levels of pollution to the environment.

Thamae further urged police to take note of this illegal trend that could not only potentially harm cars (because the reckless taking of the convertors may begin new problems) but expose the entire nation to unhealthy amounts of pollution, causing long-term health problems.