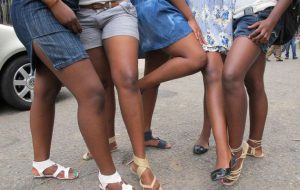 Summer is finally here after those long, cold winter days where we used to cover ourselves with almost all our clothes leaving wardrobes empty.

This is that time of the year when women are going to dress to “invite trouble”, according to some people.

For 30-year-old Carol Motolo, founder of Carol Motolo Foundation, emphasis that reducing the complexity of a woman to her body or equating her character to the way she dresses has been a damaging way to deny women their humanity and to victim-shame survivors of sexual assault or rape.

Motolo, whose foundation focuses on giving support to young girls and women who have been raped, molested and abused, says young girls across the world have been kicked out of proms and suspended from school for wearing clothing deemed too “revealing” and “distracting”, sometimes simply because of overly rigid dress codes.

“Unsurprisingly, the common targets of such policing tend to be women and it is sadly only a microcosm of a larger culture in which women’s bodies and clothing choices are perpetually policed and shamed,” Motolo says.

She adds: “Rape victims are still being interrogated about what they were wearing at the time of an assault, despite the fact that the length of a woman’s skirt should never be seen as a measure of her consent.

“Rape and sexual assault can happen to anyone; whether they are wearing a bikini or not. Society should know by now that this is a crime driven by a need for power, not by passion or sexual desire.

“Yet even today, a woman’s character comes into question should she ever choose to dress or behave in a way that society deems as immodest.”

Motolo wonders why women are constantly asked to cover themselves and be responsible for the potential reactions and actions of other people, especially perpetrators.

She indicates that this expectation of modesty has been placed on women for far too long and has been used against them to excuse, minimise and rationalise horrific acts of violence.

“The level of modesty a female is perceived to have in her clothing choices is irrelevant; she is not to blame for the actions of her perpetrators,” Motolo says.

Motolo adds that the problem also lies in the fact that society is conditioned to see women as objects.

Their bodies, she says, however modestly wrapped, are already over-sexualised even as young teens and that means whenever a woman who bares her legs, cleavage or even her collarbone is seen, people automatically reduce them to objects rather than multi-faceted, complex human beings and they forget their humanity in the process.

“The double standard is that our male counterparts are rarely, if ever, scrutinized for being a distraction or reduced to anything less than human if they dare to bare their bodies.

“In general, women are far more policed when it comes to clothing not just in schools but in society as a whole,” Motolo says.

She insinuates there are many ways women can show self-respect that have nothing to do with clothing. According to her, modesty is a personal preference and is just as legitimate of a choice as a woman choosing to dress in a more revealing manner.

A 21-year-old woman, Tholoana Kena, thinks the problem of men harassing women simply because of how they are dressed is all western culture.

She asserts in Sesotho culture women dressed half naked and it was acceptable until western culture and media set a new standard.

According to her, men have been programmed by the television to think that when particular body parts of a woman are exposed then the woman is somehow provoking their manhood, which she says is “nonsense”.

“How you dress is how you dress and it should not bother the next person. The funny thing about men is that it is a group thing, a peer pressure sort of thing.

“They never grow up; a group of men is like little boys in bigger bodies. Individually when you run into a man and you are dressed in a revealing manner he will not harass you but give him two other men and now they have the courage to disrespect women and that is wrong,” Kena says.

According to Nkhesi Nkhesi, a 29-year-old man from Leribe, wise women never wear too revealing clothes because they are aware of the consequences.

According to him, only street-wise and ‘shallow’ women reveal their body parts when dressing and therefore urges women to avoid wearing clothes that are too revealing in the first place.