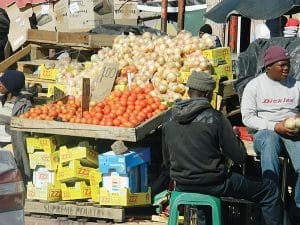 MASERU – Entrepreneurship has been touted as a potential panacea as both the public and private sectors struggle to absorb battalions of young people who graduate each year from institutions of higher learning in the country.

Analysts have repeatedly been calling for the youth of this country to identify gaps in the market and start running their own businesses.

The Ministry of Small Business Development, Cooperatives and Marketing is currently spreading the same message that Basotho, particularly youth, should shift focus towards job creation initiatives and spend less energy on looking for employment.

Unemployment levels in Lesotho remain as high as 28 percent, according to World Bank statistics.

In a move to level the playing field for Basotho the ministry has since signed a Memorandum of Understanding (MoU) with the Lesotho Post Bank to facilitate financial assistance to small business players in the country.

It seems Basotho are finally beginning to grasp the messages delivered through different channels by relevant stakeholders as many young people, including graduates, are beginning to dominate the Small Medium and Micro Enterprise (SMME) sector in the country.

The sector is regarded as a stepping stone to the industrial sector of the country.

Small businesses minister Chalane Phori has said in one of his presentations that there are many opportunities in the agriculture sector, urging Basotho to take advantage of such gap.

Pork and poultry are products which Basotho could readily supply themselves, he said.

While people are venturing into business to reduce pressure on government, lack of support among Basotho remains one of the biggest challenges facing the SMME sector as many businesses with brilliant ideas struggle to make an impact and reach their full potential.

Phori said it defies that a Mosotho would rather go as far as Gauteng 400km away just to buy an item that can be found along the streets of Maseru or from any local shop.

One may choose to walk two to three kilometres from Maseru Bus Stop to buy an apple at an upmarket mall leaving fresh and locally produced apples along the streets of Maseru.

While consumers have an inalienable right to choose, such behavior may be seen by some as directly contributing towards the downfall of emerging businesses.

That is why there are few if any local players in the apparel industry and none in the retail sector which is controlled mostly by foreign firms.

Water serves as a classical example that Basotho really prefer shopping foreign even when it is not necessary.

Water is without a doubt one of the country’s main contributors to the country’s economy through the Lesotho Highlands Water Project (LHWP).

LHWP is a multi-phased project designed to provide water to South Africa and to generate hydro-electricity for Lesotho.

It was established by the 1986 treaty signed by the governments of the kingdom of Lesotho and the Republic of South Africa. The project entails harnessing waters from the Senqu/Orange River in the Lesotho highlands through the construction of a series of dams for the mutual benefit of the two countries. Phase one of the project was completed in 2003 and inaugurated in 2004 and Phase two is currently underway.

Latest statistics show that the country annually exports an estimated 780 million cubic metres of clean water to South Africa and the supply rate is expected to increase to more than 1.26 billion cubic metres a year once phase two of the project is completed.

It is against this background that water is described as the white diamond for the mountain kingdom. In recent years many people have decided to engage in the water bottling business in a quest to supply local retails such as Pick’n Pay and Shoprite stores. Chinese supermarkets are also supplied through the same channels.

Though the industry comes with a huge potential, lack of support remains a major challenge, forcing some businesses to close. A 5litre bottle of imported water at a local supermarket costs around M21.00 while a locally packaged 5litre water bottle in the same store costs around M19.50.

Imported water registers more sales within a certain period than the locally packaged water according to a mini survey conducted by Public Eye recently which shows Basotho prefer foreign products.

Analysts say lack of patriotism and perceived social status are the main contributors towards Basotho’s preferences of foreign produce, a practice which has a damaging effect on the country’s economy ultimately.

They agree that the country has products that can compete anywhere but the fact that people want to associate with wealth unconsciously forces a lot of consumers to overlook local products.

“If people can understand the need to buy local, the country can make a lot of money because not only would businesses benefit but even the government and the local communities would enjoy the rewards,” said Blessing Dirorimwe from New Dawn Chartered Accountants in an interview with Public Eye on Tuesday this week.

The accountant believes buying local comes with a lot of benefits that sometimes consumers tend to overlook. These include reduced costs without considering issues of transport and having to deal with customs officials at boarder gates. Consumers also have a greater control on supply chain.

On the other hand, he highlighted some of the outstanding challenges that could be forcing a group of individuals to prefer foreign products.

According to him, inconsistencies by most of the small businesses and suppliers in the country as well as lack of commitment sometimes contribute towards the stunted growth or still birth of local small businesses.

“If you look on the shelves for instance, branding of local and foreign products is different. It is more attractive and appealing on foreign products than locally produced goods and I think that on its own also has a negative impact,” Dirorimwe added.

The Ministry of Small Business Development, Cooperatives and Marketing has shown commitment towards encouraging people to choose local products before going foreign and at the same time encourages people to start their own businesses in a move to arrest poverty. However, the Principal Secretary (PS) in the ministry, Lerata Pekane admitted last week in an interview that the biggest challenge now is that people do not want to support each other in business.

“People are beginning to show interest in starting businesses and we are happy in that aspect but the biggest challenge is lack of support for each other. A person may prefer to go and buy eggs somewhere in town, leaving a neighbour next door who is selling the same product,” Pekane gave this example last week in an interview with Public Eye.

To inject national pride and patriotism within local consumers, the ministry in collaboration with Basotho Enterprise Development Cooperation (BEDCO) has joined hands to promote the “buy local” campaign which is aimed at ensuring that local consumers understand the need to choose local products.

BEDCO communications officer Mzimkhulu Sithetho backed the notion that Basotho indeed have a tendency of buying foreign products over their own which, according to him, is evidenced by the extent to which Basotho cross the boarders to buy from neighbouring towns of Ladybrand, Finksburg and Matatiele.

“This is not prompted by absence of similar goods and products at home but is, instead, driven by lack of patriotism. People are not proud of their own country and therefore will not be proud of what it produce,”

“We had thought that the arrival of modern shopping malls would reduce foreign trips but unfortunately that is not happening,” Sithetho said in an interview with Public Eye on Tuesday.

The ministry of small business has since identified Wednesdays as a day to promote local products. All employees at the ministry, including the minister wear their Seshoeshoe products on this day to support the “buy local” campaign.

In addition, BEDCO has in the past supported the initiative by local Basotho nationals who promoted the concept of “Proudly Mosotho, Buy Local” both morally and financially.