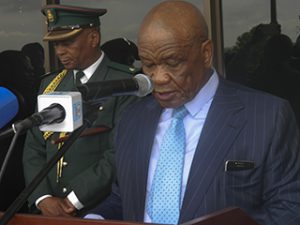 MASERU – Prime Minister Tom Thabane is optimistic Lesotho will sign the new Millennium Challenge Corporation (MCC) compact by the beginning of the second quarter of the coming year.

Thabane made this announcement before parliament while reporting that out of 20 points assessed in the MCC annual barometer, the country scored well in 16 areas.

According to him, the assessment was based on three categories which included ruling justly and observing the rule of law, investing in people and encouraging economic freedom.

Thabane applauded this as good work but noted that even though the country has the chance to sign compact II, it still has to work even harder on the areas it failed.

He reported to parliament that he has already put responsible ministers to task to ensure that those parts are achieved.

He added that MCC’s scorecard shows that Lesotho has worked well and has the capability and determination to control corruption and also respect democratic human rights.

Lesotho Compact I Millennium Challenge Corporation report of 2018 shows that MCC signed a $362.5 million compact with the Government of Lesotho designed to increase economic growth and reduce poverty in July 2007.

According to the report, the compact funded work with other international donors on one of the largest infrastructure improvement projects in Lesotho’s history, the Metolong Dam, as well as work with PEPFAR (the President’s Emergency Plan for AIDS Relief) to mitigate the negative economic impacts of poor maternal health, HIV/AIDS, tuberculosis and other diseases.

“Development needs were jointly identified by the government and MCC as a result of broad collaboration with key stakeholders, including the private sector, non-governmental organisations and civil society. The Lesotho Compact funded projects in three areas which are the water sector, the health sector and private sector development.

“By compact end, 14 outpatient health departments, the National Reference Laboratory, a National Blood Transfusion Centre, and student and staff lodging at the training college were renovated and equipped.

“The number of blood units collected yearly by mobile collection units increased 124 percent from 3,381 to 7,593, and nearly 200 health practitioners were trained in infection, prevention, and disease control,” the report states.